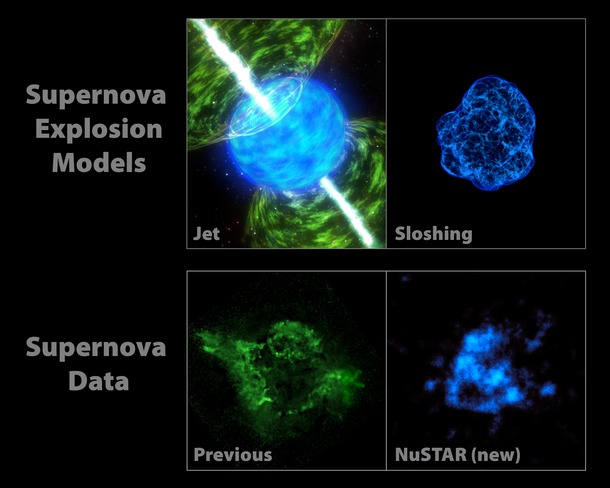 How massive stars blow up in powerful explosions called supernovas remains a mystery. Theorists have come up with computer simulations to try to recreate what happens, but it's not clear which model is correct. Now, new observations from NASA's Nuclear Spectroscopic Telescope Array of the heart of the Cassiopeia supernova remnant are allowing researchers to test those models with real evidence.

The images at the top of the graphic represent two popular models describing how stars blast apart. The models point to different triggers of the explosion. In jet-driven models, illustrated with an artist's concept shown at left, jets propel the blast wave. In models referred to as having mild asymmetries, material at the core of the star sloshes around, and this sloshing helps energize the shock wave. The graphic representing the sloshing scenario is from a 3-D computer simulation created by Christian Ott and his colleagues at the California Institute of Technology, Pasadena, Calif.

The bottom panel shows previous data from NASA's Chandra X-ray Observatory at left. Chandra sees silicon and magnesium in the Cas A remnant that have been heated up. In looking at the picture, one sees imprints of jets in the heated material. These data alone aren't enough to distinguish between the two supernova explosion models because the silicon and magnesium can be influenced by the material surrounding the supernova, and are not direct tracers of what happened in the explosion. The radioactive titanium observed by NuSTAR, on the other hand, was created deep in the explosion and allows us to see into the guts of the supernova. It is a direct tracer of what happened in the core of the explosion when the star shattered to pieces.

The titanium map looks more like the sloshing, or mild asymmetries, model -- and not the jet-driven model. This is the first observational evidence suggesting that the trigger for supernova explosions comes from a sloshing effect.