The Case of Missing Iron in Cassiopeia A 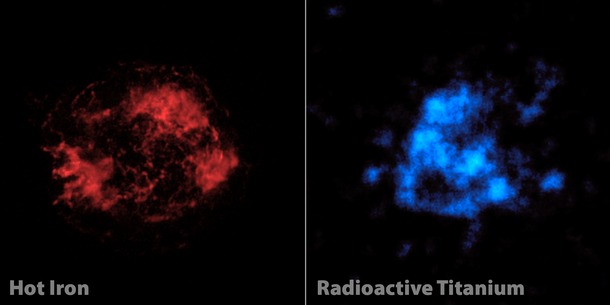 When astronomers first looked at images of a supernova remnant called Cassiopeia A, captured by NASA's Nuclear Spectroscopic Telescope Array, or NuSTAR, they were shocked. What they saw didn't match previous observations. The mystery of Cassiopeia A (Cas A), a massive star that exploded in a supernova more than 11,000 years ago, continues to confound researchers.

Previously, NASA's Chandra X-ray Observatory and other telescopes had taken images of Cas A using low-energy X-rays (left). These images show elements, such as iron, that were heated by shock waves released in the explosion. The iron is seen mainly in the outer portions of the star.

NuSTAR is the first telescope capable of creating maps of radioactive material in Cas A, which -- unlike the iron seen by Chandra -- glows even without heating. It is a more direct tracer of what happened right when the star exploded. NuSTAR is able to take pictures of radioactive titanium-44, which gives off high-energy X-rays that the telescope was designed to see.

NuSTAR's view of titanium doesn't match Chandra's view of iron, as seen in this comparison. Astronomers had thought the pictures would line up because the two elements were forged together in the supernova blast. It's possible that the iron is in fact present with the titanium at the heart of the star, but that we can't see it because it's too faint or cool. It's also possible that an entirely new theory of supernova explosions is needed to explain why iron is not in Cas A's core.