The Creation of Titanium in Stars 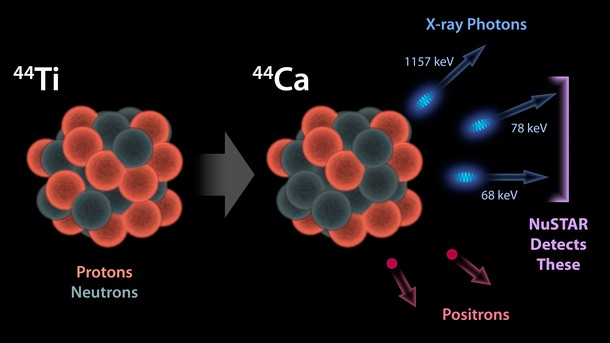 This diagram illustrates why NASA's Nuclear Spectroscopic Telescope Array, or NuSTAR, can see radioactivity in the remains of exploded stars for the first time.

When stars blow up in supernovas, they fuse lighter elements together into heavier ones, seeding the universe with the ingredients that go into making stars, planets and even people. Some of the elements produced in supernovas are radioactive, which means they are unstable and decay into lighter elements. When this happens, the radioactive substances give off energy in the form of particles called positrons -- and light, which is made up of photons.

One of the radioactive elements created in supernovas is titanium-44 (44 denotes the total number of protons and neutrons in an atom). Titanium-44 decays into calcium-44, and in the process, gives off high-energy X-ray photons. NuSTAR is the first telescope capable of creating detailed pictures of these high-energy X-ray photons. As a result, NuSTAR can map the radioactivity in supernova remnants for the first time, revealing new details about how massive stars explode.