How to Measure the Spin of a Black Hole 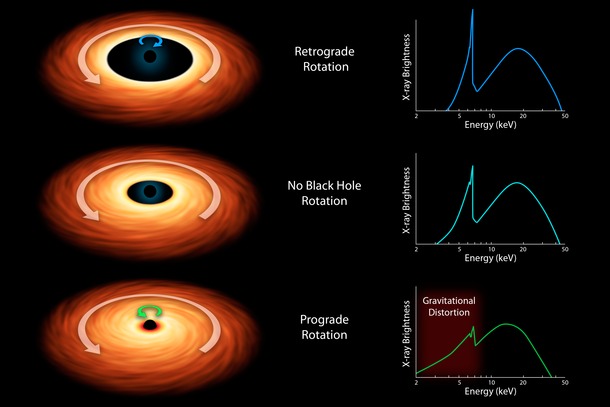 Black holes are tremendous objects whose immense gravity can distort and twist space-time, the fabric that shapes our universe. These effects, consequences of Einstein's general theory of relativity, result in the bending of light as it travels through space-time. By looking for these light distortions in X-rays streaming off material near black holes, researchers can gain information about their spin rates.

This chart illustrates the basic model for determining the spin rates of black holes. The three artist's concepts represent the different types of spin: retrograde rotation, where the disk of matter falling onto the hole, called an accretion disk, moves in the opposite direction of the black hole; no spin; and prograde rotation, where the disk spins in the same direction as the black hole.

The faster a black hole spins, the closer its accretion disk can lie to it -- another consequence of Einstein's theory of relativity.

Prior to observations with NASA's Nuclear Spectroscopic Telescope Array (NuSTAR), which captures X-ray radiation with energy from the 3 to 79 kiloelectron volt (keV) range, this model remained uncertain. Together with the European Space Agency's XMM-Newton telescope, which sees X-ray light in the 0.1 to 10 keV range, the observatories were able to show that the model is correct. Their data ruled out the possibility that the iron feature only appears to be distorted as a result of intervening absorbing clouds, and not gravitational effects.