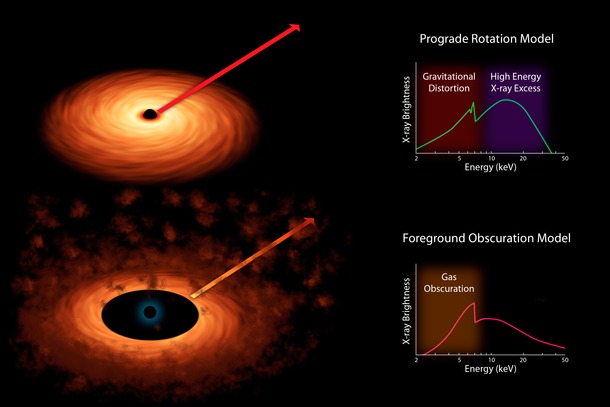 Scientists measure the spin rates of supermassive black holes by spreading the X-ray light into different colors. The light comes from accretion disks that swirl around black holes, as shown in both of the artist's concepts. They use X-ray space telescopes to study these colors, and, in particular, look for a "fingerprint" of iron -- the peak shown in both graphs, or spectra -- to see how sharp it is. Prior to observations with NASA's Spectroscopic Telescope Array, or NuSTAR, and the European Space Agency's XMM-Newton telescope, there were two competing models to explain why this peak might not appear to be sharp.

The alternate model held that obscuring clouds lying near the black hole were making the iron line appear artificially distorted. If this model were correct, the data could not be used to measure black hole spin.

NuSTAR helped to solve the case, ruling out the alternate "obscuring cloud" model. Its high-energy X-ray data -- shown at top as green bump to the right of the peak -- revealed that features in the X-ray spectrum are in fact coming from the accretion disk and not from the obscuring clouds. Together with XMM-Newton, the space observatories were able to make the first conclusive measurement of a black hole's spin rate, and more generally, confirm that the "gravitational distortion" model is accurate.