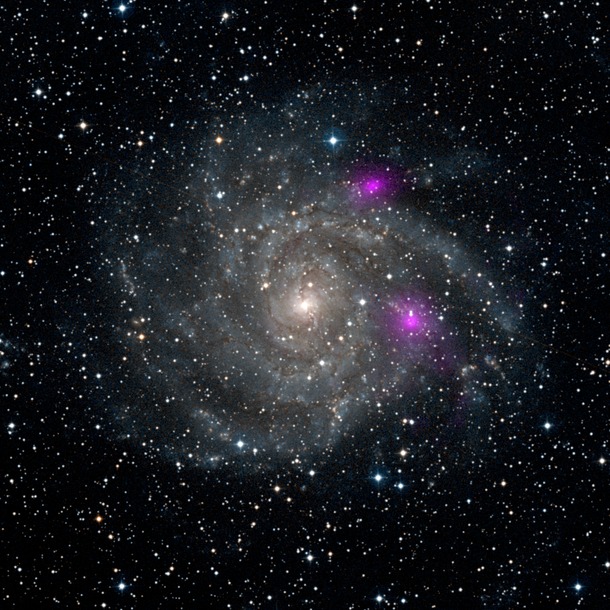 This new view of spiral galaxy IC 342, also known as Caldwell 5, includes data from NASA's Nuclear Spectroscopic Telescope Array, or NuSTAR. High-energy X-ray data from NuSTAR have been translated to the color magenta, and superimposed on a visible-light view highlighting the galaxy and its star-studded arms. NuSTAR is the first orbiting telescope to take focused pictures of the cosmos in high-energy X-ray light; previous observations of this same galaxy taken at similar wavelengths blurred the entire object into one pixel.

The two magenta spots are blazing black holes first detected at lower-energy X-ray wavelengths by NASA's Chandra X-ray Observatory. With NuSTAR's complementary data, astronomers can start to home in on the black holes' mysterious properties. The black holes appear much brighter than typical stellar-mass black holes, such as those that pepper our own galaxy, yet they cannot be supermassive black holes or they would have sunk to the galaxy's center. Instead, they may be intermediate in mass, or there may be something else going on to explain their extremely energetic state. NuSTAR will help solve this puzzle.

IC 342 lies 7 million light-years away in the Camelopardalis constellation. The outer edges of the galaxy cannot be seen in this view.

The visible-light image is from the Digitized Sky Survey.